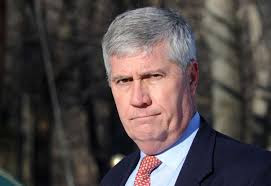 Today, your suggestion and that of Rep. Rebimbas will be challenged through a media strategy to indicate that the Chairs have engaged, personally, in aiding and abetting false testimony‎ to be delivered in your self described "rigorous" review of those re-nominated for judicial reappointments.

I have confirmed by performing due diligence on the Chairs that the six page form of the Judicial Selection Commission have never been secured and distributed to the membership of the entire Judiciary Committee.

While we would agree that it would be important to redact telephone numbers and addresses for judges to ensure you, as attorneys, do not abuse your position to talk to judges on matters under current litigation including appeal.

There is a legitimate and well grounded concern about a far too "cozy" relationship between the Chairs of the Judiciary Committee and ranking members who are attorneys.

We noted the Chief Justice, in the offices of the Judiciary Committee where the Chairs have an office, meeting prior to the start of the re-confirmation process which began on January 11, 2017.

Do you really believe that members of the United States Congress meet to discuss cases which are controversial decisions?

It may be time for the citizens of this State to initiate a change in the State Constitution to change the Connecticut judiciary to an elected---not an appointment position inasmuch as lawyers, as legislators, have consistently voted favorably on all judicial re-appointments.

Your refusal and failure to provide for public inspection copies of the Judicial Selection Commission forms sworn as "truthful" and not distributing that redacted document to the members of your OWN committee raises serious issues of your self-proclaimed "due dilligence" today.

The decision of the Chairs to limit public posting of transcripts to refute testimony of judges is another example of creating a system where "perjured" testimony is not only tolerated but condoned by the chairs who are definitely more interested in coddling judges than "professional skepticism" which is the hallmark of many professions.

The Judicial Review Council needs to be revised so that all complaints, dismissed or not, are a matter of public record.

The comments on "sealing cases" by Judge Buzzuto for judges who go through a divorce is inconsistent with open disclosure of records to ensure that "addresses are redacted" but the decisions an open public record---just as you make our decisions a matter of an "open public record" which is used to humiliate the citizens while protecting the privacy rights of public officials.

Recent surveys done on the judiciary ranks Connecticut as one of the least transparent of any state in the country.

The fact that the judiciary cut $60 million from its budget because it was bloated without services being decreased should be a clear sign that the legislators, in general, don't have the same "access issues" to the courts that the general public has to endure.

The fact that Rep. Rebimbas refused to disclose on her "stump speech" on Judge Adelman that she received appointments by Judge Adelman smacks of an undisclosed conflict of interest.

As you know, the lack of disclosure of the answers to the 32 questions by your Committee Chairs is a clear sign that what you don't know can hurt the citizens you claim to serve.

There will be letters sent to those who you serve who will be randomly selected off the voter roles to expose the failure of the Chairs to have properly investigated allegations of misconduct reported to you by "railroading" controversial candidates within a week of the controversy involving allegations of perjury to be investigated by a select subcommittee which is balanced with lawyers and non-lawyers to review transcripts which the Chairs refuse to post and share with the colleagues on the committee as "equals".

The lack of "professional skepticism" by lawyers serving as legislators is demonstrated by your consistent voting and "unchallenged" public comments by Rep. Tong and Rep. Rembimas.

The Chairs of the Judiciary Committee asked no tough questions about the "Hightower" matter raised by Rep. Tong---who never even asked a question about it to Judge Adelman today.

There is only ONE representative of the people on your committee who asks tough questions and that is Minnie Gonzalez.

I watched all but one interview conducted by your committee on Wednesday and Friday and I am one of five individuals who will have filed by tomorrow complaints with the Chief State Attorney on five judges who meet the standard of probable cause for arrest for perjury defined in C.G.S. 53a-156 (a).

If the Chief State Attorney Office had a grand jury system in place, then judges would be far less likely to deliver material and false testimony and in written statements provided to the Judicial Selection Commission is provided with a General Release Form.

Until the Chairs take corrective actions to rebuild the trust that only you can restore, the public will exercise our rights to expose "corrupt practices" which the Chairs seem to support.

Have any of you ever sat in a Monday short calendar in family court and watched the meter running?

Have any of you visited a courthouse in Virginia where a help desk directs clients to "calendered" matters in which Connecticut has to run a "pilot program".

The "cattle calls in family courts" is the single, most inefficient way to conduct the public's access to justice.

Despite Rep. Tong's statements that you take these comments seriously, all we need to do is review the voting records of the 19 lawyers on the judiciary committee (if we include one member who had a direct relative on the Supreme Court) and your attempts to deliver Judge Fuger's head on a platter today to show how "tough you are".

At no point in time, since Judge Frazzini sent a "letter of retraction" after I filed a criminal complaint alleging perjury to the Chief's State Attorney's Office has any judge been subject to a delayed vote until a full investigation of allegations of perjury occurs.

There is a section of the Code of Judicial Conduct which prohibits a Judge from making a knowingly false statement to a legislative committee.

Until there is either legislative reforms to clean up this system of inefficiencies in due process and remove judges from sitting on administrative committee meetings which take them away from their duties "in court", we will continue to challenge publicly and privately, whether you approve or not, our "professional skepticism" that the lawyers in the legislature are engaging and abetting perjury by refusing to table the vote on any judge who is alleged to have committed perjury under oath.

We will be unrelenting because this "tyranny" creates through the empowerment of "judicial discretion" to rape and pillage the financial resources of parents via a reallocation of our lifetime savings to support your "system of racketeering" by having lawyers sitting in a courtroom for hours and then billing their clients for accomplishing nothing and being paid for it.

I would be happy to sit down with you to discuss with a group of litigants to show us the evidence of perjury---which are now on their way ‎for review by the "probable cause" standards which apply to criminal arrests of those judges who made knowingly false material statements to a committee.

For Rep. Rebimbas to have made a claim that "she has some sort of access to transcripts" to the 3,850 pages of transcripts, is nothing less than balderdash.

We are tired of the "obstruction" by the Chairs to a proper review of evidence by limiting the posting of transcripts on the judiciary committee website.

In the movie "A Few Good Men", Jack Nicholson's line seems appropriate to close this email:

"You can't handle the truth."

Posted by Catharine Sloper at 10:51 PM