CHRISTINE DEMPSEY AND DAVID OWEN OF "THE HARTFORD COURANT" REPORT AS FOLLOWS:

"HARTFORD — Tiffany Stevens was sentenced to probation Monday after she pleaded guilty to inciting injury to persons, bringing her murder-for-hire case to an end.

Her plea came in Superior Court shortly before 10:30 a.m. before Judge Edward J. Mullarkey. He then gave her a suspended, 10-year sentence followed by five years of probation.

She is not to have contact with the person she had targeted, her ex-husband. 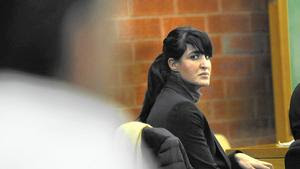 Stevens' murder-for-hire trial ended in December with a mistrial after the three men and three women on the jury said they were hopelessly deadlocked.

The former Bloomfield resident was accused by Simsbury police of paying handyman John McDaid $5,000 to kill her former husband, Eric Stevens. Tiffany and Eric Stevens are engaged in a contentious dispute over custody of their daughter, and Eric Stevens told police and, according to trial testimony, McDaid that a large amount of money would go to the custodial parent.

Evidence presented during the trial indicated that the money did not exist..."

http://www.courant.com/breaking-news/hc-simsbury-tiffany-stevens-plea-0804-20150803-story.html
Posted by Catharine Sloper at 11:44 AM No comments: Links to this post

On December 12, 2014, David Owens of "The Hartford Courant" reported,
"Tiffany Stevens' murder-for-hire trial ended Friday with a mistrial after the three men and three women on the jury said they were hopelessly deadlocked.
The jurors sent out notes three times telling Superior Court Judge Edward J. Mullarkey that they could not reach a verdict on the charge of attempted murder. The first two times, Mullarkey sent the jurors back and asked them to keep deliberating.
About 4:30 p.m., jurors sent the third note. Mullarkey asked prosecutor Anthony Bochicchio and defense attorney Hubert Santos what they thought.
"I don't think there's any purpose in keeping them any further," Bochicchio responded..."
For those who are interested, it looks as though the $50 million trust fund that was alleged to go to the person who obtains custody of the child in this case apparently does not exist.  Go figure!
Anyway, for more information on this matter, please click on the link below:
http://www.courant.com/breaking-news/hc-tiffany-stevens-muder-for-hire-deliberations-20141212-story.html
Posted by Catharine Sloper at 1:17 AM 1 comment: Links to this post