A MOTHER'S TEARS MATTER: HOW FAMILY COURT BULLIED PROTECTIVE MOTHER, PAIGE STVAN, AND CUT HER OFF FROM THE DAUGHTER SHE LOVES, PART II! 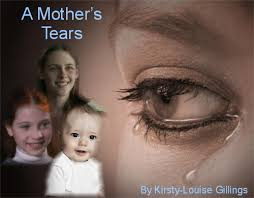 What we have here is a tragic situation where a mother has been separated from the child she raised for 12 years based upon unsubstantiated and untrue representations of mental illness.  Meanwhile, questions regarding her ex-husband's bipolar disorder remain unaddressed.

Subsequently, Judge Adelman acknowledged that the representations regarding Ms. Paige Stvan's mental health weren't sufficient to justify keeping Paige away from her daughter.  At that juncture, he then claimed that there were other serious allegations that her child had raised which now justified separating Paige Stvan from her daughter. What were those serious allegations?  To be honest, I couldn't see anything in the many documents I reviewed that would explain it.

The allegation the child made that the judge cited in his memorandum as a basis to stop all visits was that Mom was making visits with her uncomfortable.  As Ms. Paige Stvan explained it, she was allowed visits with her daughter once a week for an hour standing in the corridor of a local mall.  To start with, that's a pretty difficult way to conduct a visit.  Next, Ms. Stvan stated that during these visits the father would remain in the sidelines monitoring the entire visit and at the least sign of trouble advise his daughter to simply leave.  As a result, under the pressure of essentially being put between two parents, the child would terminate the visit within ten minutes.  To Paige Stvan, this was simply a situation where the father was using the visits to drive a wedge between herself and her daughter.

Attorney Rosa Rebimbas, the GAL in the case, reported the situation somewhat differently.  She alleged that Paige Stvan insisted upon talking to her daughter about the case during the visit.  But what does that mean "talking about the case?"  Does that mean Paige tried to explain to her daughter what was going on and why she couldn't come home to her Mom?  Was it something else? Attorney Rebimbas didn't specify; she just used trigger words with the judge which she knew would elicit a negative reaction.  Keep in mind, we are getting this testimony from the ex-husband and a biased GAL who appear to be willing to do anything they can to justify a complete no contact order. I also think it makes no sense to have visitation with a child standing up in a crowded corridor in a mall.  What's that all about?

Repeatedly, the opposing attorney in this case, Attorney Nancy Aldrich insisted that Paige Stvan's daughter didn't want to see her Mom, so therefore she shouldn't have to. Attorney Rosa Rebimbas emphasized that the daughter didn't want to see her mother and indicated her belief that the daughter had the right to refuse to see her mother.  Judge Gerald Adelman reported in his Memorandum of January 8, 2016 that "the child was extremely resistant to any contact with her mother" and implied that this justified denying Ms.  Stvan access to her daughter.  However, this is not how state law works. According to Connecticut law, at any age, a child's preference is never the only criterion for making a custody decision in a custody proceeding.  What counts is what is in the best interests of the child.

Further, I am wondering how a 12 year old child who had never before reported being unhappy with her mother, all of a sudden, within two months of being totally cut off from all access to her mother, becomes extremely resistant to seeing her mother.  Keep in mind, these words never came out of the child's mouth directly, and were simply what biased individuals with ulterior motives chose to report. I am also wondering why a 12 year old child has the authority, not only to choose the time and place of the visits, but whether they take place at all.  I don't know of any other case where a pre-teen was given such extraordinary power.

Perhaps the answer to this lies in observations that Dr. Linda Gunsberg reported on at the time these events were taking place.  In a letter to the court dated January 26, 2016,  Dr. Linda Gunsberg described hearing a conversation that Page Stvan had with her daughter over the phone.  She described this conversation, which took place on November 2, 2015, in the following terms:

"The most incredible phone conversation occurred when Ms. [Stvan] called [her child] during the court ordered parent telephone access to speak with her.  I asked Ms. [Stvan] to put [the child] on speaker phone so that I could listen.  [The child] was very warm towards her mother, was eager to share with her mother information about projects she was working on for school, and actually wanted to remain on the telephone longer than Ms. [Stvan] could...It was a normal parent-child conversation."

Again, it is remarkable that Judge Gerald Adelman supported this 12 year old child in making the decision not to see her mother again. A 12 year old child doesn't have sufficient cognitive ability to make such important life decisions.  In fact, you would hardly believe that this Judge Adelman is the very same Judge who, in the Sorentino case, put a mother in jail to force a 15 year old boy to live with the father he adamantly didn't want to live with.  Yet, in the Stvan case, when a 12 year old girl refused to see her mother, that very same Judge Adelman appointed two attorneys to defend her right to exclude her mother from her life?

How is that OK?

How come  Judge Gerald Adelman found a 12 year old's decision more credible than that of a 15 year old?

Do any of you recall how, when Kathi Sorrentino cried at the thought of having to go to jail, Judge Gerald Adelman derided her and made fun of her, calling her tears "crocodile tears"? Why do judges in the State of Connecticut, such as Judge Adelman, only use PAS to deny mothers their parenting rights while excusing fathers who are equally culpable?  Protective mothers in the State of Connecticut would really like to know!  We need a new campaign in this State with the slogan:  A mother's tears matter!
Posted by Catharine Sloper at 7:38 PM 1 comment: Links to this post