IT'S AN EPIDEMIC: STOP DOMESTIC VIOLENCE BY PROXY! 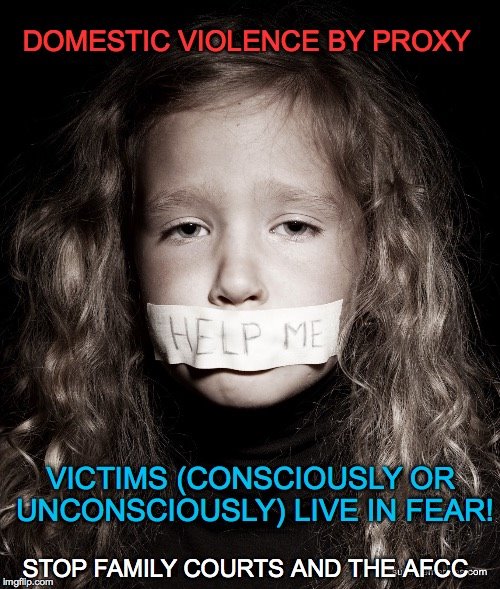 Posted by Catharine Sloper at 12:09 PM No comments:

"When Kate finally escaped her abusive husband, she thought that the violence and terror were over. What she learned instead is that, when children are involved, escape and safety become even more difficult as abusive ex-partners use child custody and the family court system to continue their harassment and abuse.

The first time her husband hit her, Kate was pregnant with their first child. He had forgotten his fanny pack at the drug store, Kate recalled. Once at home, she told Truthout, "he smashed me hard on the back of the head and said, 'How could you be so stupid?'"

It was the first time he had struck her, but her husband had emotionally and verbally abused her for years. "I felt like I was walking on eggshells and was nervous all the time," she explained. "All I could do was grovel and then go back to the drug store to get it..."

http://www.truth-out.org/news/item/35101-for-domestic-violence-survivors-family-court-becomes-site-of-continued-abuse
Posted by Catharine Sloper at 12:38 AM No comments:

LINKS TO REPORTS SUBMITTED AT SEPTEMBER 22, 2015 MEETING OF TASK FORCE RE MINOR'S EXPOSURE TO DOMESTIC VIOLENCE!

LINKS TO REPORTS PROVIDED AT THE SEPTEMBER 22, 2015 MEETING

Posted by Catharine Sloper at 3:06 PM No comments:

Posted by Catharine Sloper at 2:56 PM No comments:

THE CONNECTICUT JUNKIE REPORTS ON STUDY REGARDING FAMILY VIOLENCE IN CT!

Elizabeth Regan of The CT Junkie reports as follows:
"The authors of a study told lawmakers Monday that family violence is “no different than other contagious diseases.”
The 165-page report by the Connecticut Academy of Science and Engineering, titled “Addressing Family Violence in Connecticut: Strategies, Tactics and Policies,” was commissioned by the legislature’s Public Health Committee in 2014. It was released in June with numerous recommendations based on findings that most efforts to reduce family violence haven’t produced measurable benefits.
“Family violence tends to be passed on as a negative contagion within the family from one generation to the next and it is pervasive,” the study said. “The side effects include numerous behavioral health problems including drug use, depressive disorders, anxiety disorders, and illegal behavior, among others...”
READ MORE:
http://www.ctnewsjunkie.com/archives/entry/study_recommends_new_approach_to_treating_family_violence_cases/

Posted by Catharine Sloper at 7:04 AM No comments: