"The U.S. Justice Department is sending a “dear colleague letter” warning state and local courts about constitutional concerns regarding fees and fines imposed on poor defendants.

The letter (PDF) from the department’s Civil Rights Division and the Office for Access to Justice urges courts to review procedures regarding fines to make sure they comply with “due process, equal protection and sound public policy.” A press release links to the letter and describes a $2.5 million grant program to help agencies develop strategies that reduce unnecessary confinement of those who can’t pay fines and fees. The Washington Post and the New York Times have coverage.

Dear colleague letters have been used “to help push the boundaries of civil rights law,” according to the New York Times. Yet they are unusual. The last such letter, issued in 2010, advised judges they need to provide translators for people who can’t speak English.

“Typically, courts do not sentence defendants to incarceration in these cases; monetary fines are the norm,” the letter said. “Yet the harm caused by unlawful practices in these jurisdictions can be profound. Individuals may confront escalating debt; face repeated, unnecessary incarceration for nonpayment despite posing no danger to the community; lose their jobs; and become trapped in cycles of poverty that can be nearly impossible to escape.”

The letter outlined “basic constitutional principles” regarding fee and fine enforcement. They include:

1) Courts shouldn’t incarcerate a person for nonpayment without first determining whether the person is indigent and whether the failure to pay is willful.
2) Courts must consider alternatives to incarceration for indigent defendants unable to pay. Alternatives could include requiring community service or classes, reducing the debt or extending the time for payment.
3) Courts must not condition access to a judicial hearing on the prepayment of fees and fines.
4) Courts shouldn’t use bail or bond practices that keep indigent defendants incarcerated because they can’t afford to pay for their release."

For originating link, see below:

http://www.abajournal.com/mobile/article/justice_department_warns_local_courts_about_illegal_enforcement_of_fees_and
Posted by Catharine Sloper at 3:06 PM 2 comments: Links to this post

"Following a comprehensive investigation, the Justice Department today announced its findings regarding the Family Court of the Twenty-First Judicial Circuit of the state of Missouri, commonly known as the St. Louis County Family Court.  The Justice Department found that the family court fails to provide constitutionally required due process to children appearing for delinquency proceedings, and that the court’s administration of juvenile justice discriminates against Black children.  The investigation was conducted under the Violent Crime Control and Law Enforcement Act of 1994, which gives the department the authority to seek a remedy for a pattern or practice of conduct that violates the constitutional or federal statutory rights of youths in the administration of juvenile justice..."
READ MORE:
http://www.justice.gov/opa/pr/justice-department-releases-findings-constitutional-violations-juvenile-delinquency-matters
Posted by Catharine Sloper at 6:23 PM No comments: Links to this post

According to the Hartford Courant:

NEW HAVEN - Federal law enforcement officers, struck by what they called the persistent criminal behavior of government officials in Connecticut, said Wednesday that they have created a multi-agency, federal task force to fight public corruption in the state.

U.S. Attorney Deirdre M. Daly, who announced the task force and whose office will run it, said graft has become so pervasive in Connecticut that it is "discouraging and troubling" and a "persistently present problem."

She also questioned the legislature's refusal to provide local prosecutors with effective crime fighting tools. "High profile government corruption persists in Connecticut," she said, "So the time is opportune for us to put together a top notch team."

For more information on this article, please click on the link below:

http://www.courant.com/news/connecticut/hc-corruption-task-force-0205-20150204-story.html
Posted by Catharine Sloper at 7:09 AM 2 comments: Links to this post

THE CT MIRROR REPORTS THAT GOV. MALLOY HAS NOMINATED JOETTE KATZ TO REMAIN AS HEAD OF DCF!

Gov. Dannel P. Malloy announced Tuesday that he plans to nominate Joette Katz to remain the leader of the Department of Children and Families — the state agency that has 4,000 abused and neglected children in its care on any given day.

"She has shown she has the experience to lead a team of dedicated staff who strive to ensure that Connecticut’s children and families are healthy, safe, smart and strong,” Malloy said in an press release. “Commissioner Katz and her team have made a number of changes that are showing results, and I look forward to having her on board to continue this critical work." Katz's appointment will need to be approved by the legislature, and her nomination is certain to face resistance.

I know I am not alone among both Democrat and Republican legislators when I say I have concerns about this reappointment. DCF has had significant problems under Commissioner Katz’s leadership, and I believe Commissioner Katz has been pushing DCF in the wrong direction,” said Incoming Senate Minority Leader Len Fasano, R-North Haven.

For more information on this particular topic, please click on the link below:

http://ctmirror.org/2014/12/23/malloy-reappoints-katz-as-dcf-commissioner/
Posted by Catharine Sloper at 5:35 PM No comments: Links to this post

ANNE STEVENSON REPORTS ON THE UPCOMING INVESTIGATION OF CORRUPTION IN THE CONNECTICUT COURT SYSTEM!

"NEW HAVEN, Conn., February 5, 2015 — The U.S. Department of Justice and representatives of five federal law enforcement agencies announced this week the establishment of a public corruption task force in the State of Connecticut. The task force will investigate corrupt public officials, the misuse of public funds and related criminal activity.

Some state officials have suggested that the task force’s first order of business should be to address problems with fraud and corruption in the State’s family courts. According to the Connecticut Judicial Review Council’s website, the 25 member committee has fielded tens of thousands of complaints filed by consumers against Connecticut judges, however, fewer than than 11 judges have been subject to public disciplinary hearings since the 1980’s.

“Public servants are entrusted by all of us to act in the best interests of the public they serve. It is important for the United States to bring to justice those who betray that trust,” said FBI Special Agent in Charge Patricia M. Ferrick. “Public corruption at all levels of local, state, and federal government must not be tolerated, and this task force will leverage the best assets of the task force partner agencies to address the threat posed by corrupt public officials.”

For more information on this topics, please click on the link below:


Posted by Catharine Sloper at 4:54 PM No comments: Links to this post

CT DOJ REPORTS ON THE ESTABLISHMENT OF A FEDERAL TASK FORCE TO INVESTIGATE GOVERNMENT CORRUPTION IN THE STATE OF CONNECTICUT!

A press release from the CT DOJ states as follows:

For more information on this Task Force, please click on the link below:

CT DOJ ANNOUNCES IT WILL BE INVESTIGATING THE CT JUDICIAL BRANCH FOR ADA VIOLATIONS! 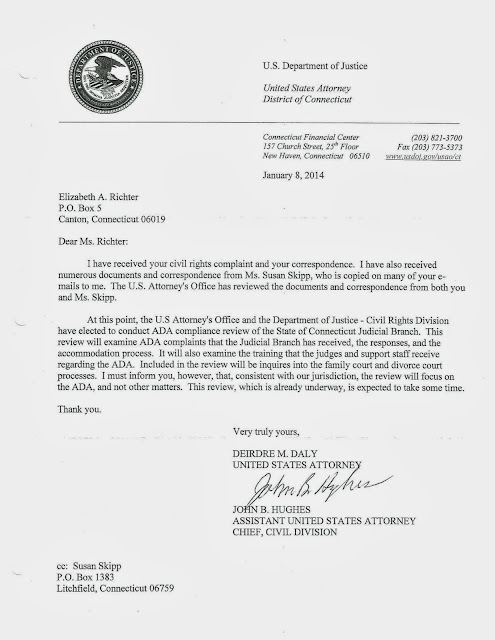 Posted by Catharine Sloper at 7:07 PM No comments: Links to this post