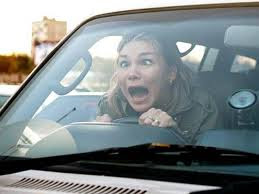 Yes, I know I suffered a great deal from my divorce. But do you want to know what suffered the most?  My car!  Yes, My car!

First of all, there was the direct damage from my ex.  What he would do is put screws in the tires of my car so that I would end up with a flat tire.  When he wasn't expelling the air from some of my tires, he was adding it on to others with a icycle pump, so some of the tires would be on the verge of going flat, while others were almost popping right off they were so full of air.

Next there was me.  If my ex upset me with an argument before I got in the car, or I received a court document in the mail at the Post Office just before getting into the car, then I would peal out of my driveway, or the parking lot, depending on where I was, with a mighty squeal of my tires and a roar of the car engine.

Sometimes I would be so upset that I wouldn't actually be conscious of where I was going or how fast I was going, and I didn't always have control of my mouth when stopped by a police officer.

By the way, for those of you who didn't know it, the speeding limit is 25 miles per hour in a residential area not 50, even if you are going down a hill.  I repeatedly forgot that when the nightmares of what was going on in Court replayed themselves in my mind again and again and I was at the wheel of my car.

During my divorce, I was constantly getting caught for one thing or another--not stopping at a stop sign.  I mean, who sees stop signs when you might lose your child in a custody battle?  Turning on a red light.  "Oh, come on, that red light was never going to turn green, officer!"

I mean, who can be patient when you are adding the numbers in your bank account and recognizing that you can't pay for the heat or electricity that week and that the kids also need checks for their school lunch but you can't afford that either.

Then there are the fender benders--rear ending other people, or having other people rear end you because you braked suddenly.  How about backing out of parking spaces right into the traffic behind you.  I mean, who has time to look behind you when you are on your way to Court.

Of course, driving with insurance papers is impossible when your husband won't pay the car insurance and yet you still have to drive to where you agreed to exchange the children according to the custody agreement; otherwise, you'd be in contempt--right!

And, of course, when the police stop you for a routine check and you don't have car registration because your ex didn't pay town taxes, well, that's all par for the course!  That means you are lucky if they let you tow your car home, lucky if you have $80 in cash to pay for the tow, and lucky if you can get a friend to drive you and your crying children home so you all don't have to walk.

Oh, and the times when I just forgot to renew my license--those were good ones.  Try explaining that to a police officer.

My favorite incident is the time when my kids were talking, talking, talking with me and I was blabbing back all stressed out and I backed right into a truck smashing my rear window.  Then there was the time I backed out of a parking spot and sheared off the front bumper of my car.

Yes, this is the quintessential high conflict divorce experience--sliding past a curb and smashing a headlight,  backing out of the garage and knocking off a side mirror, scarring the entire side of your vehicle on a fence.  Scraping, scratching, banging, you name it, I did it...to my car, all in the throes of my divorce.

A lot of this led to citations, which led me to traffic court, which meant I spent many mornings at the courthouse at Lafeyette Street sitting among crowds of fellow car abusers, waiting to plead my case to the prosecutor and cut back on the fines I owed. I want to tell you how much time it took to repair registrations, correct licenses, update car insurance, beg prosecutors not to fine me, at least not that much, and sit in dealerships while my car was repaired.  It took lots and lots of time.

Thank goodness, everything has calmed down in the last few years as I have solidfied my custody of the children and become more effective in advocating for myself in Court.  As a result, when I drove an unsuspecting friend of mine around recently for a little sightseeing she said, "Boy, you are good driver!  So calm, so collected, so careful when you turn corners.  "Little do you know." I answered, "Little do you know."
Posted by Catharine Sloper at 5:38 PM No comments: Links to this post