WITH A NOD AND A WINK: HOW CT FAMILY COURT BULLIED PROTECTIVE MOTHER, PAIGE STVAN, AND CUT HER OFF FROM THE DAUGHTER SHE LOVES, PART I! 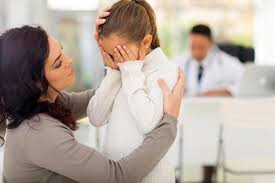 On September 25, 2015, Paige Stvan was hospitalized for a few days to address negative side effects she had to a new medication she had been taking. Meanwhile, since she was dealing with these medical problems, in a very responsible way, Ms. Stvan asked her ex husband, Thomas Stvan, to care for their 12 year old daughter temporarily. He agreed to do so. However, instead of just taking care of the child as agreed, Thomas Stvan used the incident as a excuse to file an emergency ex parte motion in court granting him full custody.  That motion was granted.  As a result, since that time, except for a few brief encounters at a local mall, Paige Stvan has not been allowed to see her daughter.

Paige Stvan had been taking care of her child for 12 years, and the child was happy and healthy, well fed and with a roof over her head, as well as successful in school. Nonetheless, family court, in a series of dirty tricks and maneuvers, effectively assisted her ex husband in excising the child from her mother's life with the collusion of a CT State representative, Rep. Rosa Rebimbas.

Now remember, this is the same judicial system which gave career criminal Joshua Komisarjevsky full custody of his 5 year old daughter just weeks before Mr. Komisarjevky participated in the triple slaying of the Petit family.  In Paige Stvan's case, this was a woman who had done nothing other than be an excellent mother to her daughter for twelve years. Still, the Court saw fit to cut her off entirely from the child she had been bringing up so successfully.

We all want the reason for that, don't we?  Just so you know, you would have no basis for knowing the reason had Ms. Paige Stvan not requested one because, unlike in every other custody case I've ever seen, originally the Court didn't bother to provide a memorandum of decision stating the legal basis for its decision.

But here we go, I have before me a January 8, 2016 Memorandum provided by Judge Gerald Adelman explaining his decision.  This is what he says.

The ex parte was granted (see p. 3 of the memorandum) because "it was represented to the court that the defendant had a history of mental health issues which had previously required the plaintiff to temporarily assume primary or sole custody of the minor child, due to the  defendant's inability to care for said child."  Yes, but these, to my knowledge are and were simply representations without evidence.  To this day, I not seen any documents that can back up these claims.

Not only that, in these documents there was no mention of the fact that the Plaintiff, Tom Stvan, was represented to have a bipolar disorder.  Why?  Because the ex parte hearing only heard one side of the story at that time. That is why the law requires another hearing 14 days later--so that before anything is finalized, you have a fair hearing where both sides have the opportunity to present their arguments.  Mysteriously, in Paige Stvan's case, although such a hearing is required by law, it never occurred.  This is just the first of the kinds of procedural flaws that have plagued this case from the beginning.

It is also important to note regarding the term "it was represented" that anyone can "represent" anything to anyone in this world. Eventually, in a court of law, you have to come up with proof.  At no time that I have observed during the many hearings that were held in this case was there any kind of legitimate evidentiary hearing in which allegations of this nature regarding Paige Stvan could be either confirmed or denied.  Futhermore, from all the information I have in front of me, there is no evidence at all that Ms. Stvan had any such history.

How can any judge possibly justify removing a child completely from a mother's life based upon "representations."?

Meanwhile, I have in front of me a letter that Dr. Linda Gunsberg, Paige Stvan's psychotherapist, wrote to the court.  In this letter, Dr. Gunsberg stated that Ms. Stvan has "Post Traumatic Stress Disorder as a result of domestic violence within the marriage, after the marriage, and as a result of constant, continuous litigation brought against her by Mr. Thomas Stvan, her ex-husband."

Dr. Gunsberg also stressed that Paige Stvan is a competent primary caretaker and mother to her child and that the child flourished under her care.  She also stated that the father's behavior of cutting Ms. Stvan off from all access to her daughter constituted parental alienation.  Of course, everyone knows I'm not a fan of PAS theory, but I just point it out for what it's worth. Again, as I've said before, when a mother points out PAS or PA whatever you want it call it, judges couldn't care less.  PAS only matters if a man complains about it.

I also have a letter from a social worker who also provided treatment for Paige Stvan in which she stated, "I can confidently state that...it is apparent that Ms. [Stvan] does not present with psychological deficits that would compromise her ability to care for her child. Furthermore, Ms. [Stvan] has been highly motivated to take advantage of the services that have helped her to gain an understanding of her current circumstances, while seeking a path towards betterment as an individual, as well as a mother."  In addition, on Paige Stvan's behalf, LMFT Linda J. Gottlieb took the time to provide an extensive explanation to the Court regarding the phenomenon of parental alienation and how to identify it.  I think it says a lot for Paige Stvan that three well qualified mental health professionals took the time to speak up on her behalf.

I would also like to point out that Paige Stvan has always been honest and straightforward to her ex husband about any medical issues she has and has always taken responsible steps to address them.  The result has been successful, and it appears as though she is being punished for that very success.

I understand that two sides in a legal case can end up interpreting data differently which is why you end up in Court anyway.  That is the reason why a case like this would end up in family relations for a custody evaluation to determine whether testimony one way or another is credible.  What is striking about this case is that despite the dire consequence where a Mother has been entirely cut off from any communication with the daughter she raised for 12 years, there was no family relations report, no custody evaluation whatsoever, indeed, no investigation whatsoever.

How is that possible?  I have no idea.

I just do not understand that.

When issues were raised in my case regarding my mental health, I ended up having two psychiatric evaluations and one psychological evaluation.  What happened to me was pretty excessive and is testimony to the extremely damaging impact accusations regarding mental health status can have.  Still, the idea that you could cut a mother off from her child based upon allegations regarding her mental health status that have yet to be proved, and, as you have seen from the testimony I provided, have actually been soundly refuted, appears absolutely outrageous and represents a tragic miscarriage of justice for this mother and her child.

You cannot simply point at people, call them crazy, and use such unfounded and unproven claims as the basis for denying them their parental rights.

As the General Statutes Section 46b-46(c), which is the basis for all custody decisions, state, the mental and physical health of the parents involved is a factor in custody decisions, however, the "disability of a proposed custodial parent or other party, in and of itself, shall not be determinative of custody."  Furthermore, under Title II of federal ADA law, disability based discrimination is against the law in this country.  Certainly, the issue of disability should not be determinative without a fair and just evidentiary hearing where there is an equal playing field.

However, what it looks like is that the judge and the attorneys in this case think that they can deny Paige Stvan her legal rights by nodding and winking and sweeping everything under the rug, simply by virtue of the fact that they think she has a mental health disability.  Likewise, they think they can smooth over and ignore father's possible bipolar disorder.  Trust me--that's not happening.

More on this case in Part II.
Posted by Catharine Sloper at 7:31 PM