FAMILY COURT VICTIMS NOT SORRY ABOUT THE DOWNFALL OF JUDGE JANE B. EMONS! 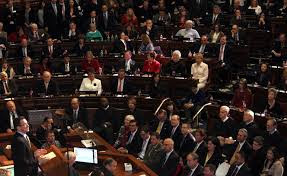 As Michael Skakel exits the CT Judicial System after years of persecution, it is interesting to see family court victims succeed in their efforts after similarly fighting years of persecution.  When it comes to Michael Skakel, the press is beginning to understand that there might have been a miscarriage of justice.  Unfortunately, when it comes to family court victims the media still lacks any insight.

For instance, in the article "Legislators use calendar to kill a judge's career" of May 4, 2018, Mr. Mark Pazniokas of The CT Mirror pulled out all stops to make us feel sorry for poor Judge Jane B. Emons, i.e. "Representatives stripped Superior Court Judge Jane B. Emons of her job Friday.  There was no debate, no vote, no fingerprints."

Does he truly expect victims of family court to start coming up with crocodile tears for this judge? If he does, he can forget it.  Perhaps now Judge Emons can understand what it is like to lose custody of your children without a hearing, without the opportunity to present testimony and evidence, without a judgment, and without any legitimate recourse for a bad, unjust decision since Appellate Courts routinely rubber stamp trial court judge  decisions.  Perhaps she will now appreciate what it means to have a powerful person say to you, as in the Mary Puzone case, "You won't get nothing!" and then, lo and behold, "You get nothing." even though you are retired, in cancer treatment, and trying to live with dignity on very little money.

So the General Assembly "failed the judge and her critics alike by refusing to debate her fitness and their complaints."  This sounds like a lot of custody cases I know about where litigants were denied the opportunity to present their side of the story, were unfairly labeled as having a mental health disorder purely based upon rumor or GAL misrepresentations, and then haven't seen their kids in years.  It sounds just like some litigants who are barred from obtaining relief from the family court system based upon Strobel v. Strobel orders requiring they ask permission before attempting to do so, permission that they are never granted.

I'm sure it hurts, doesn't it?

Why should the process be fair for judges when it definitely isn't fair to family court victims?

What makes judges so special that they should be excluded from receiving the exact same bad treatment they have no problem meting out to hapless self represented parties?

At least no one is mocking and ridiculing and insulting Judge Jane B. Emons in the same way that I have personally observed and experienced judges do to self represented parties in family court all the time.

Personally, I think it is saddening when The CT Mirror reports that, according to Rep. Arthur J. O'Neill, this situation "is very unusual." and Rep. Rosa Rebimbas states, "I haven't seen a case like this."

Yes, representatives, it is true.  Justice is rarely served to ruthless, cruel, and incompetent Judges even though it should be. Thank God, justice happened this year in the Spring 2018.

We in the family court reform movement have been fighting for justice for well over a decade.  We finally get some movement, a single situation where the CT State Legislature is doing the right thing and Arthur and Rosa are crying and carrying on?  Please.

Mr. Jonathan Wiegand, one of the earliest victims of CT Family Court injustice in the seminal child sexual abuse case Wilkinson v. Wiegand, committed suicide in 2017.  We mourn the death and suffering of victims.  To the media, I say, If you want to feel sorry, if you want to make a difference, and change the world for the better, perhaps investigating the CT Judicial Branch's repeated and stubborn insistence upon mishandling child sexual abuse cases might be a good start, beginning with the Woody Allen case!

Mr. Mark Pazniokas of The CT Mirror continues on to speak  about family court victims, scoffing at their so called "conspiracy theories" and "claims of judges being in league with pedophiles."  Tell me, Mr. Pazniokas or any other so called journalist in the State of Connecticut, have you actually investigated any of these claims in a serious manner?  Have you reviewed documents, actually read them, rather than just collected them and quietly stuck them in some corner where they are collecting dust?  Have you read Court testimony?  Have you spoken to witnesses?

You haven't actually looked at any information whatsoever because you aren't really doing your jobs as journalists and you aren't truly investigating the story as your professional ethics require you to do. As I have mentioned before in previous blogs, I believe this is because when media decision makers regularly meet informally with the judges and attorneys of the CT Judicial Branch in Judicial-Media Committee meetings, it becomes easy to ally with the folks you meet and befriend regularly rather than with citizens who are suffering from the abuse and torture of a corrupt and chaotic legal system that has destroyed their lives.

Today, I am going to send out a challenge. I invite any responsible journalist or journalists with a conscience to do the proper investigative work in the area of family court injustice.  I'm ready to state that we will stand the test, that our evidence will demonstrate conclusively that our cause is just, and that if truth is what a journalist is really looking for, he or she will find the truth among family court victims, not among Judicial Branch sycophants.  The bottom line is that, when it came to the reappointment of Judge Emons, according to Sen. Gary Winfield, "the stories about Emons kept coming in, stories from constituents disconnected from the organized community  of family-court critics. They described a judge who was abrasive, even abusive."  Why is that ever OK?

The top "Divorce in Connecticut" blog, "Going, Going Gone", which describes the corruption of family court attorneys and judges, continues to garner tens of thousands of hits each month, outstripping any other blog.  If you want to confirm that, keep track of the top five articles listed on the home page of this blog for a couple of months and you will see I'm right.  These numbers do not lie.  They describe a level of harm and injustice perpetrated on the citizens of the State of Connecticut for which there is absolutely no excuse.  Legislators who then take action to defend these most vulnerable citizens must be commended for their courage, their commitment to good government, and their wise leadership.
Posted by Catharine Sloper at 7:26 PM