FAMILY COURT ATTORNEYS IN THE STATE OF CONNECTICUT HAVE WORSE REPUTATIONS THAN PEDOPHILES! 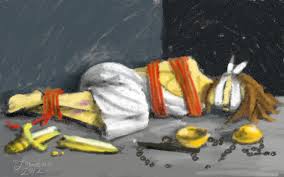 It was tough to read the May 12, 2017 "CT Law Tribune" article in connection to the Dianne Hart-D'Amato case, particularly as a person who has walked in Dianne's shoes and experienced what she has experienced.  It was angering to read Dianne, and by inference all self represented parties in family court, spoken of as "a disgruntled litigant."

I wonder how attorneys and judges would feel if I spoke of them automatically as crooked attorneys or crooked judges simply by virtue of the fact that I do not agree with them.  It is not often a bully pulpit such as "The CT Law Tribune" exists as a means to tongue lash the people a particular profession does not like.

You may object to this statement, but the numbers tell the tale.  Not only does the 89% tell a tale, but take a look at my most consistently popular blog for the last seven years listed on the top right side of my website.  It is "Going, Going, Gone" the story of the despicable way in which my own attorney treated me during the course of my own Family Court case.  Tens of thousands of page views do not lie.  What they do is state unequivocally that Family Court attorneys in the State of Connecticut have worse reputations than pedophiles.

That should bother them.

But clearly it doesn't because instead of taking the necessary steps to reform their profession, one that has descended into widespread disrepute, they waste their time publishing the kind of self justifying nonsense that they wrote about in "The CT Law Tribune" regarding the Hart case.

Let us talk about what happened to Dianne Hart.

Ms. Hart-D'amato filed for divorce from a man who was extremely abusive.  Instead of protecting Ms. Hart from this abuse, the Court just allowed him to run rampant.  As she has stated, her ex subjected her to a constant barrage of harassment: he threatened her both physically and verbally, wrote insulting remarks about her on the bathroom mirror, pounded on the bathroom door and walls leaving marks when she tried to shower, and told their children she didn't love them.  When he felt like it, her ex withheld her children from her, and when he did allow a visit he insisted on staying in order to videotape the visit.

From what it looks like Ms. Hart-D'amato must have incurred charges of at least $200,000 or more only to find herself, at the end of the case, homeless, penniless, and childless.  There is more in terms of false claims made against her etc., but I don't want to deviate from the main point of this article, which is to address the illegality of the decision in her appellate case.

The bottom line is that, with or without this appellate decision, Family Court litigants, and self represented litigants currently face major injustice in the CT Family Courts on a daily basis including, but not limited to, the following:

1.  in chambers hearings off the record (solely attended by the judge and the attorneys in the case) where statements and agreements are made behind litigants backs but which have immense impact on the outcome of their cases;

2. psychological tests of litigants where results are tampered with and skewed to favor one side or another;

3.  custody evaluations and GAL reports which are not based upon the facts or the evidence, but are the result of complete fabrication on the part of the professionals involved;

4.  litigants are denied access to the evidence such as psychological tests or custody evaluations or GAL reports in advance of trial so they are unable to defend themselves;

5.  bribes or influence peddling carried out by legal professionals in order to pay the way to favoring one party or the other;

6.  court decisions made that are independent of the CT statutes and case law and are solely justified as the exercise of a judges discretion;

7.  the Courts arbitrarily and without any legal grounds barring evidence and testimony it just doesn't want from trial.

8.   attorneys filing to withdraw from a case within days of trial, on the morning of the trial, or during the trial.

In this last decade I have either personally witnessed, experienced myself, or heard other people report on these kinds of situations occurring under oath.

In the face of such widespread and deep corruption, in the face of this global perversion of justice within the Family Court System, the decision in the D'Amato v. Hart-D'Amato case is simply laughable.

I also want to say directly to Ms. Dianne Hart-D'Amato how much I deeply sympathize with your plight. I know you personally and I know how sincere you are, how much you love your children deeply, and how much you have fought for your rights on principle.  As an American citizen, I know that when you fought for your own rights, you were also attempting to stand up for each and every one of us who could not fight for ourselves.  Far from being frivolous, your cause was just, your cause was right, and your cause was honorable.

Getting back to the point of "The CT Law Tribune" article, it says that the Courts are clogged. Trust me, the Courts are not so clogged that an attorney who wants to can't unclog it when it suits him.

Meanwhile, hanging around the Courtroom for how many hours it takes is currently a lucrative way for an attorney to make money without even having to do anything.  If an attorney is really enterprising, and many are, he or she can bring two or three clients to Court at the same time and charge all three for waiting around.

Trust me, if you were wondering, business is good for the insiders in the Family Court scams that are going on.

Further, this Law Tribune article states that the Appellate Court has determined that hearings on motions are no longer necessary, and that due process can be served as long as the motion is submitted in writing.

Of course, without an evidentiary hearing, much of what a motion would state would be hearsay which is supposedly not allowed in a Court of law.  This is because in the CT Family Court system you are not simply allowed to attach documents as exhibits to the motions you file. So anything you said in the motion would be unsubstantiated.

How many times has any one of us tried to give testimony and been silenced because what we had to say was not backed up by original documentation?  I'd say like almost all of us.  Yet now the Appellate Court is saying we can get around that problem by simply putting what we want to say in writing?  If you say so, your honor!

In addition, if you are talking a Motion to Open, which is what Dianne Hart-D'Amato primarily submitted, she paid good money for that motion--is it $300 bucks?  You'd think that given all that money she paid, which of course would include the additional $60.00 or so to have a marshal deliver it to the opposing side, this would at least entitle her to a hearing.

But the Appellate Court says not apparently.

If there are any lawyers reading this, or if my readers today have any experience with Family Court, you know what I'm saying is true, don't you.  What this Appellate Court has done is simply end the pretense.  It appears that from now on, we won't have any more of these silly show trials that in their disregard for the law and the evidence, and indeed simple humanity and common sense greatly rivaled Stalin's show trials (Otto Warmbier move over).  As it turns out, in this decision, we didn't lose anything we hadn't already lost.

See CT Law Tribune Article at the link below: